In the previous episode of Golden Kamuy, we saw Sugimoto group escaped from Asahikawa 7th regiment barracks using hot air balloon ship and ended up in a mountain where they were stuck because of bad weather.

Golden Kamuy episode 18 starts when the storm passed away and Sugimoto and Ogata are looking for the 7th regiment soldiers. They didn’t find them but they could meet with them on the way to Abashiri. So they decided to take a detour through Tokachi and then go to Abashiri instead of going straight to Abashiri to shake the 7th regiment soldiers off. Asirpa agreed with the decision since  Kiroranke and others plan to meet then in Abashiri if they get separated.

Tanigaki Nispa (Tangaki Genjirou) is traveling with Chikapasi and Inkarmat. He sent a telegram to Otaru to check on Huci (Asirpa’s Grandmother) when they left Yuubari. Now he will get the response in Hitomai Post Office from Asirpa’s uncle who can read and write a little Japanese since he used to work with the Japanese. In the letter, it reads “Huci making Raikur Shiyuku.” Genjirou learns from Inkarmat that Raikur Siyuk is a burial shroud that Ainu elderly make when they know death is near. Tanigaki and Kenkichi stuck in a cave because of bad weather

Inkarmat also explains that Ainu people think they can’t go to the next world without kids and when an Ainu dies those he/she left behind must perform a ritual before they can pass on to the afterlife. That’s why they will always raise children, even one that not their own. Then Chikapasi cheers Genjirou by saying that he will bring Asirpa back safe and cheer up Huci.

Story of Tanigaki Genjirou aka Tanigaki Nispa’s Past: While walking and thinking, Tangaki Genjirou goes on a flashback several months ago with Lt. Tsurumi where he talked about his reasons joining the army. At first, he talks about a food called Kanemochi that his clan Ani Matagi use. One day when he and another hunter named Aoyama Kenkichi is hunting for wild goat called Aoshishi in the mountains, the weather suddenly got worse and they seek refuge in a cave where they were trapped for days. The beans and rice they brought soon run out. But they save the Kanemochi for the last to eat because it never spoils. First Kenkichi shares his Kanemochi with Genjirou and then he shared his next day. In Genjirou’s Kanemochi he added Walnut which Kenkichi easily identifies. After that, soon they get out off the cave and they become good friends. Tanigaki and Lt Tsurumi taking about Tangaki’s past

After that, Kenkichi married Genjirou’s younger sister Fumi and become his brother in law. Then Fumi and Kenkichi lived quietly up on a mountain, away from the village. On that day while making Kanemochi he heard from his brother that something has happened to Fumi. When he reached her little Hut, he found everything is burnt to crisps. He then found his sister’s burnt body with a stab on her heart with Kenkichi’s Masuke (Short Blade called as Soul of Matagi).

Then he searched everywhere for Kenkichi including his house but couldn’t find him. But one day he heard Kenkichi joined the 7th regiment in Hokkaido. Then he joined the military and start looking for Kenkichi while working but couldn’t find him. But When Genjirou is going to join the war, he heard that his mother died. She died because she couldn’t take the shock of separating from both of her children. Genjirou then controls his emotions by telling his mind that all of this is because of Kenkichi. Tanigaki giving Sugimoto a Kanemochi and learn about Kenkichi’s whereabouts.

Then Genjirou went to Port Arthur, where the soldiers from Hokkaido were gathering but he still couldn’t find him there. He plans to kill Kenkichi in the middle of the battle by shooting from behind if he finds him. In the battlefields of Lushun, Genjirou he found Sugimoto with his face covered in blood and offered him mochi. While eating Mochi Sugimoto notices that the dish is from Akita and he informed Genjirou that his roommate from 1st division is also from a place called Ani in Akita. Genjirou instantly understand that it was Kenkichi. Kenkichi joined the military from Tokyo 1st regiment. Since the soldiers at Hill 203 were from the Hokkaido 7th, the Shikoku 11th, the Kanazawa 9th, and the Tokyo 1st, Genjirou is hopping to find Kenkichi in there. Kenkichi tackling a suicide bomber to save other soldiers

But that hill wasn’t the sort of place where he would have time to look for Kenkichi because of the constant throwing of grenades and suicide bombers who tied grenades to their bodies and jumped into their trenches. In a similar way, another Russian soldier came their way and they try to stop him by shooting but that didn’t work. Then a lone man came running out of one of the trenches and try to stop the Russian suicide bomber but the bomb exploded. The Soldier who stopped the Russian was Kenkichi who barely survived from the explosion.

Genjirou finally found Kenkichi and wants to kill him the same way he killed his sister. But Kenkichi is bleeding and lost his hearing from the explosion and he is in his deathbed. In his Deathbed, he told Genjirou (without knowing that he is talking with Tangaki Genjirou) to take a message to a man named Tanigaki in Ani, Akita. Tanigaki asking Kenkichi why did he killed Fumi, his wife

Kenkichi told him that his wife Fumi had smallpox. But she didn’t want to tell her family because they will come running and catch the virus too. At that time if a family member of mountain people catch smallpox, they will avoid and abandoned them. He refused to abandon her but she wanted him to kill her and leave the village before anyone found out. She then tells him to finds his own purpose in life if he survive. He couldn’t see her suffer, so he killed her using his Masuke and burned the house as she told him. Then he left the village without telling her family about her death. After telling the story, he requested Genjirou to tell the story to her family. Then Genjirou gives a little Kanemochi in Kenkichi’s mouth and he instantly recognized  that it was Genjirou and he died smiling knowing that he conveyed his story to his wife’s family. Then Genjirou tells Lt. Tsurumi that Kenkichi found his role in life and spent the rest of his days carrying it out. But he still couldn’t find his role in life, so he can’t go back to Ani and face his brother and father. Lt. Tsurumi then tells him that he needs him and wants to eat the Kanemochi with walnut that he talked about. 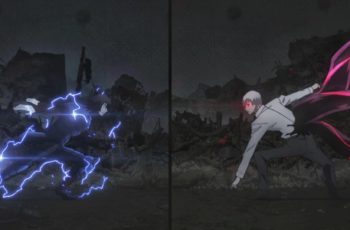 Episode Name: “incarnation: Awakened Child” In the previous episode of … 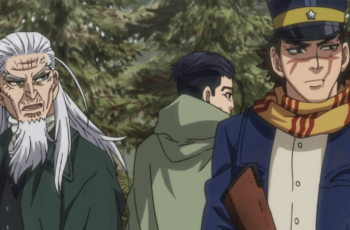