Episode Name:Whispers and Prayers and Chants

In the previous episode of Goblin Slayer, we saw that Goblin Slayer fought with the Goblin Champion and won. But he got severely injured and lost his consciousness.

Summary of the Episode: In this Goblin Slayer Episode, we see some flashbacks about Goblin Slayer’s past with his mentor who taught him about goblin slaying in his dream. He was asked some word puzzle if he wants to learn from him. If he got any of the puzzle ’s answers wrong, he will be killed. He got the first two puzzle right but when was about to answer his third question, his dream ended and he got his consciousness back. Child Goblin Slayer was being tested by his weird Mentor

She says, she was the Sword-Maiden who defeated the Demon Lord but couldn’t save herself from some goblins. After that, Sword Maiden asks Goblin Slayer to save her since she is frightened by goblins to this day. While Goblin Slayer and Sword Maiden finished talking, the Priestess woke up and the High Elf, Dwarf and the Lizardman entered the room. Goblin Slayer stands up and started to wear his body armor which was damaged by the Goblin Champion in the Underground Ruins. Then everybody goes to the town where they eat together. After that, the High Elf, the Dwarf and the Lizardman are going to the underground sewers to scout for goblins. Before leaving, they told Goblin Slayer to fix his armor. Goblin Slayer and the Priestess go to a blacksmith where they fixed his armor and her protective Chainmail urgently by paying extra money. After fixing their armor, they walk in town and started to by buy stuff for killing the goblins. Then the Majo and her teammate Yaritsukai came to meet with Goblin Slayer because he asked for a sack of pure wheat. Yaritsukai asks him why did told them to bring the wheat since he can find them in Water town. Goblin Slayer told them that the wheat in this town will not work. Then all of them enters the Underground Ruin where they find a giant Eyeball which shoots at anything in its site. The Eyeball can also dispel any magic spell. Goblin Slayer than cooked up a plan to destroy it.

He tells the High Elf to run around the Eyeball and the Dwarf to use his Stupor magic spell to daze him a little while he throws the Wheat in the room. Then he asks the Lizardman to use his Dragon Tooth Warrior to be the target of the Eyeball. When everyone is out of the room, he asks the Priestess to cast the Protection Spell to enclose the room. The Giant Eyeball then uses his eye beam to shoot at Dragon Tooth Warrior in the hazy room. Then the room suddenly exploded into bits and the Eyeball gets killed. Then Goblin Slayer explains that if there is fine power in an enclosed room with a little spark, it is bound to explode. After confirming Eyeball’s death, they entered the room and observes a mirror which looks like a portal to someplace else…….. 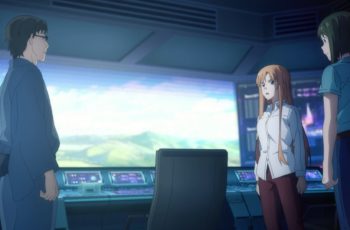 Sword Art Online Episode 06 has too many details, that’s … 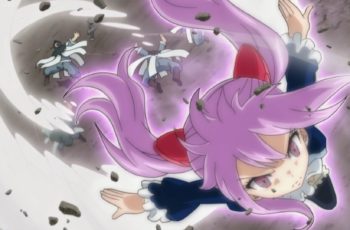