In the previous episode, the High Elf killed two goblin guards in-front of goblins ancient ruin cave. In this Goblin Slayer Episode 4, we see that they enter the cave. Before entering Goblin Slayer cut a dead goblin and puts it blood on priestess and High Elf, so goblin couldn’t understand their scent. When that enter the cave after a little while the High Elf notices a trap. But the Goblin Slayer sees no sign of a Sharman in the cave. Goblins are not that smart they will setup trap by themselves.

The Dwarf figures out which way is goblins hideout. But Goblin Slayer decided to go to opposite direction to the goblins waste disposal room. In the room, they find a Elf captive in the room. The Elf is in very bad shape. In the room the was a hidden goblin, so she tells Goblin Slayer to kill it. Goblin Slayer killed it with a strike of his sword. The moment before Ogre’s arrival

The the Priestess uses heal on the Captive Elf and the Lizardmen uses a spell called Dragon-tooth Soldier. The a skeleton like soldier appears and he took the Elf to the Elf village with a message. Goblin Slayer searched the room and find the map of the Ruins. The High Elf is very shocked by seeing her own kind assaulted very brutally. Before going to the goblins den, Goblin Slayer asks every one how many times of magic they have left. Priestess tells him she can still use miracle 2 more times. Lizardmen replied by saying that he has one Dragon-tooth warrior and 3 rounds of magic. Dwarf has 4/5 rounds of magic use.

Then, Goblin Slayer decided to go to goblins den. They find all of them are sleeping. Goblin Slayer made a plan to make them asleep by combining Dwarf’s Stupor magic and Priestess’s Silent magic spell. With spells every goblins are now unconscious in their sleep. Then Goblin Slayer, High Elf and Lizardmen kills the goblins one by one. When they are finished killing all the goblins, suddenly a big Ogre appears. The Ogre tells the Goblin Slayer that he was bestowed the goblin soldier by one the Demon Lord’s General. Goblin Slayer then tells the Ogre that he doesn’t know any Ogre. By hearing that the Ogre got angry and started to fight with them. Then the Ogre uses a spell called Lacta which is a Fireball throwing magic. The Priestess uses her Protection magic spell twice to save them. But now she can’t use anymore.

Then the Lizardmen use his Dragon-tooth magic again and a Dragon-tooth soldier appears. They attack together. In the meantime, the High Elf Shot the Ogre in the eye. The Dwarf uses is a spell called Stone Blasts to hit the Ogre with stones. But nothing is working. That’s when Goblin Slayer cut the Ogre on the leg but It healed instantly. Then the Ogre hit Goblin Slayer so hard that he lost his conscious for a while. Meanwhile, the Ogre pulls the arrow out of his eye and it’s healed instantly too. Everyone is trying to attack but nothing is working.

In between this, this the Priestess go to Goblin Slayer’s body and try to wake him up. When he wake up, he tells her to give a healing Potion and a Stamina Potion from his pack. She give him those from his bag. After drinking them, he stands up and go towards the Ogre and tells everyone that he has a plan.

When Ogre sees Goblin Slayer, he tried to use his fireball spell Lacta again. But when he is activating his spell, suddenly his hand and hold body split into parts. Goblin Slayer used a ancient Gate Spell which transport people to different place in times of emergency. But Goblin Slayer used the spell to transport Ogre’s body where because of too much pressure his body split into several pieces. Then Goblin Slayer walk on Ogre split body and put his sword on Ogre’s brain to kill him. After successfully killing the Ogre, they go out of the Ruins. Outside the ancient Ruins, they met scout from Elf’s village . They lend them the carriage to go back to the guild. In the carriage, the High Elf asks the Priestess is Goblin Slayer always like that. She says yes. The High Elf tried to sleep but can’t because of the nightmare adventure she had just now. With that the episode ends……. 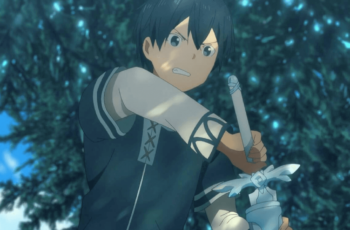 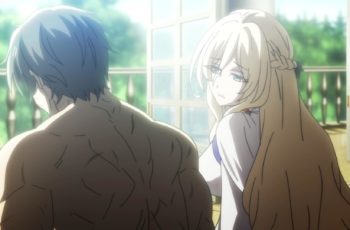 Episode Name:Whispers and Prayers and Chants  In the previous episode …